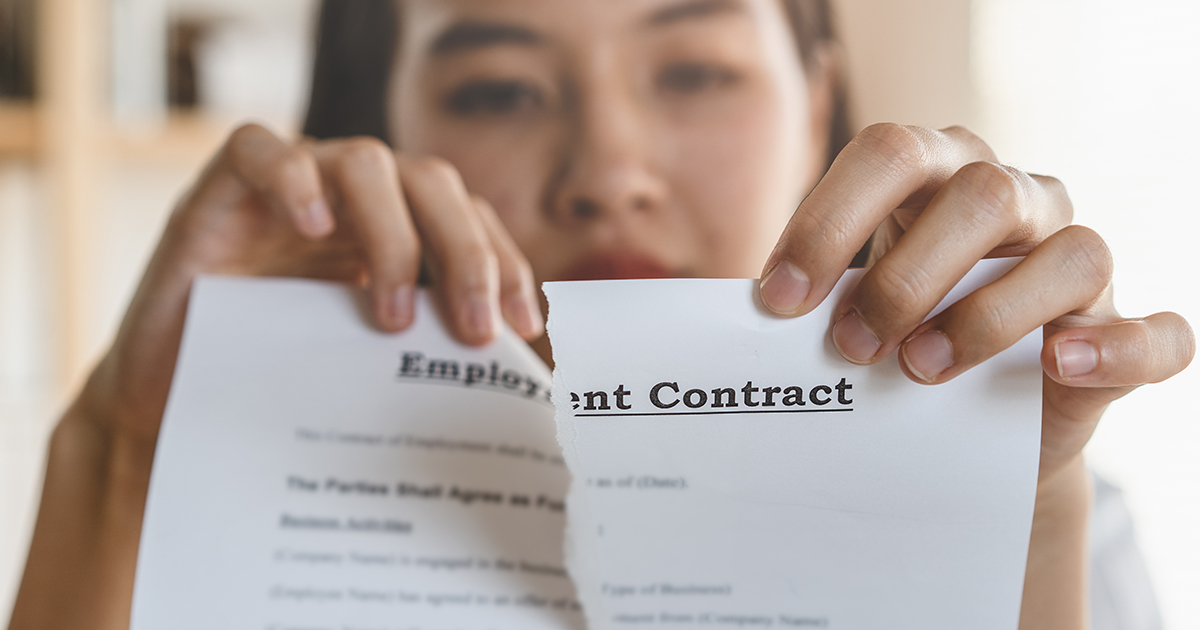 A contract is repudiated when a party to the contract breaches a fundamental term or condition of the agreement.

In the recent decision of Perretta v. Rand A Technology Corporation, the Ontario Superior Court of Justice (“ONSC”) found that the employer’s actions post-termination demonstrated an intention to no longer be bound by the terms of the employment contract, and therefore the employer could not later rely on the contract to limit the employee’s entitlements at termination.

Ms. Perretta was an employee of Rand A Technology Corporation (“Rand”).  She was a Sales Representative when she was terminated, without cause, on March 31, 2020. Ms. Perretta’s employment contract entitled her to two weeks’ pay in addition to her statutory entitlements to termination pay under the Employment Standards Act. Rand admitted it mistakenly refused to provide Ms. Perretta’s two weeks’ pay in lieu of notice as stipulated in the employment agreement unless she first executed a Full and Final Release. Ms. Perretta retained a lawyer who wrote to Rand that its treatment of its employee was in breach of the employment contract. Rand responded on April 24, 2020, through its legal counsel, and apologized for requiring that Ms. Perretta sign a Full and Final Release. Rand then transferred to Ms. Perretta the equivalent of two weeks’ pay and the monetary value of her entitlements under the ESA.

Ms. Perretta submitted that Rand repudiated the employment contract, and therefore she was entitled to damages for wrongful dismissal at common law without the limitation imposed by the Termination Without Cause Provision in the agreement. Rand responded that it merely made a mistake, had since apologized, and should still be allowed to limit Ms. Perretta’s entitlements on dismissal to those set out in the Termination Without Cause Provision.

The Ontario Superior Court held that the employer had repudiated the employment contract.  In coming to the decision, the Court cited Remedy Drug Store Co. v. Farnham, 2015 ONCA 576, 389 D.L.R. (4th) 671 and White v. E.B.F. Manufacturing Ltd., 2005 NSCA 167, 239 N.S.R. (2d) 27, referencing the need to do an objective assessment of the purported breaching party’s intention and the surrounding circumstances.

Justice Sanfilippo clarified that the

“test is whether, considering surrounding circumstances, including the nature of the contract, the motives which prompted the purported breach, and the impact of the party’s conduct on the other party, a reasonable person would conclude that the breaching party no longer intends to be bound by the contract with the result that the innocent party would be deprived of substantially the whole benefit of the contract. A party can repudiate a contract without subjectively intending to do so, because the assessment is made objectively” (at paragraph 20).

Objective assessment of the defendant’s breach

The Court accounted for various factors including:

– The release went above and beyond releasing the employer from any causes of action, but included further substantive terms, showing it was not a “casual or accidental slip” as claimed by the employer;

– The employer relied heavily on its reversal of position after receiving legal advice from the employee’s lawyer; and,

– There was no apology for all the terms the employer had demanded, other than the mistaken two weeks’ entitlement without condition.

The Court held the assessment would lead a reasonable person to conclude the employer no longer intended to be bound by the employment contract. The decision also confirmed that even if the employer made an  “innocent mistake”, this does not change the analysis. The test for establishing repudiation is an objective one, so the intentions of the parties are irrelevant, and the only analysis is whether a reasonable person would conclude that the breaching party no longer intended to be bound by the contract.

Impact of the breach on the innocent party

The ONSC again cited Remedy Drug Store for the requirement in repudiation to assess the impact of the breach. The breach must deprive the innocent party of “substantially the whole benefit of the contract”: Remedy Drug Store, at para 50. As the two weeks’ salary in lieu of notice was the only monetary entitlement available to the employee under the employment contract, by refusing the entitlement, the employer deprived her of the entirety of the monetary benefit available to her under the contract.

This decision demonstrates that the Court will not look kindly upon an employer not following the terms of their own contract, no matter whether the breach was a mistake or not. If you are an employee who has been terminated, speak to an employment lawyer at Monkhouse Law to ensure that you are receiving all of your entitlements under your contract, applicable legislation, and the common law.