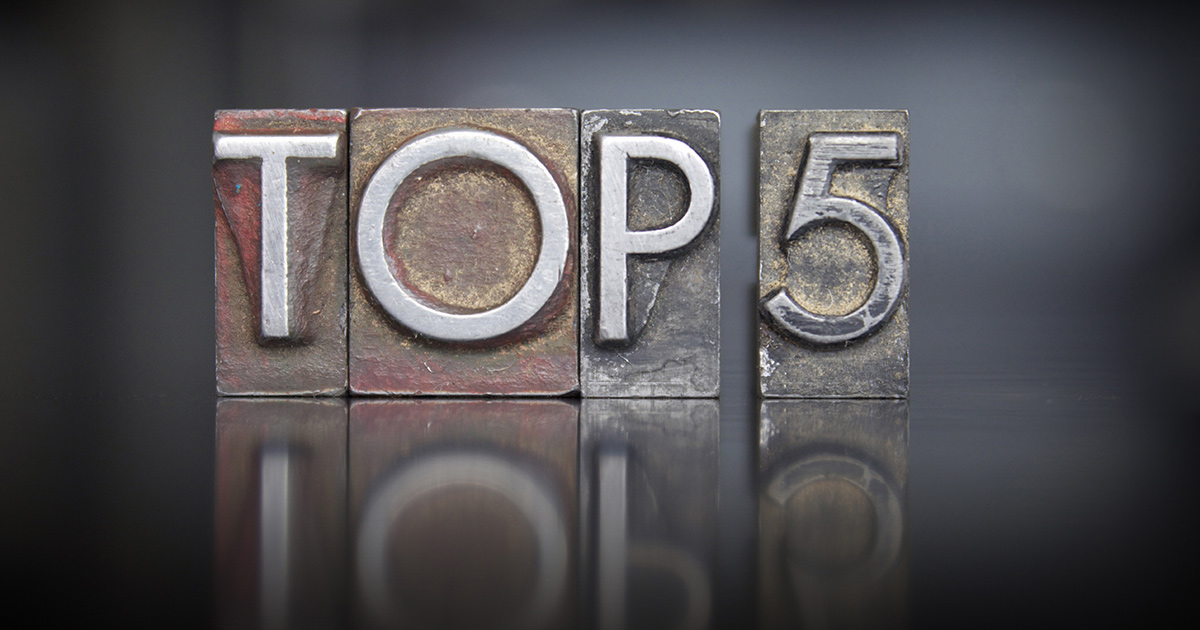 As we look back upon 2019, there have been many judicial developments that have impacted employment law across Canada. Monkhouse Law has compiled our ‘top five’ decisions, as well as a close runner up below:

First, we would like to start with a case that deserves an honourable mention but did not quite make our ‘top 5’ cases for 2019.

In this case, Andros v Colliers Macaulay Nicolls Inc., 2019 ONCA 679, the Ontario Court of Appeal found a failsafe clause within a termination clause was ambiguous voiding the entire clause. A failsafe clause provides that, regardless of any other terms or conditions of a termination clause, an employee who is terminated without cause will always receive at least what they are entitled to under employment standards legislation.

The Court concluded that the placement of the failsafe clause (“the greater of”), in the middle of the termination clause, split up the Employment Standards Act (“ESA”) entitlements from the two other options laid out in the termination clause. Therefore, the ESA entitlements did not extend to those two other options making the entire clause ambiguous and contrary to the ESA. The employee was therefore entitled to common law notice, including any bonuses during the notice period.

The Court took a consistent approach to its 2018 decision in Amberber v. IBM Canada Ltd., which highlighted the importance of having a failsafe clause at the end of a termination clause in order for the failsafe to extend to the entire clause. The Court also adopted the Andros approach to failsafe clauses to reemphasize the importance of unambiguous termination clauses in its recent decision in Rossman v. Canadian Solar Inc.

This case was a close runner up demonstrating the need for employers to draft clear and unambiguous failsafe clauses in order to avoid including options in termination clauses that contravene ESA standards.

Coming in at a strong #5 on the list is the first Canadian appellate court decision dealing with the tort of harassment.

The Court did not rule out the possibility that another case may provide grounds for a properly conceived tort of harassment in the future. It will be interesting to see if Mr. Merrifield seeks leave to appeal to the Supreme Court of Canada to argue that a tort of harassment needs to be established, in light of recent societal movements on harassment, such as the “me too” movement.

Coming in fourth on the list is a case that dealt with the highly debated 24-month “cap” on common law reasonable notice.

Courts have issued awards for notice periods over 24 months before for older, long-term employees. However, the motion judge in this case went one step further and found that “when there is no comparable employment available, termination without cause is tantamount to a forced retirement”. Subsequently, the motion judge awarded Dawe a 30 months’ notice period. Equitable Life appealed the length of the notice period on the grounds that the motion judge’s award was excessive.

The Court allowed Equitable Life’s appeal and reduced Dawe’s notice to 24 months. In its decision, the Court confirmed that any amount over 24 months’ notice should be based on exceptional circumstances. In Dawe’s case, the motion judge’s decision was not based on exceptional circumstances, but rather the judge’s perception of broader social factors regarding retirement. Additionally, the Court held that mandatory retirement considerations were irrelevant to Dawe’s situation because he swore in his affidavit that he planned to retire at the age of 65 and there was no basis to find that he would have work past that age.  While Mr. Dawe did warrant an elongated notice period, the Court found no basis to exceed the 24 month cap.

This case could very well move up on our list for 2020 as leave to appeal was filed with the Supreme Court of Canada on November 19, 2019, and is currently pending a decision.

Rounding off the top three is a case that seems to distinguish itself from our #4 case of 2019.

In this case, Dussault v Imperial Oil Limited, 2019 ONCA 448, the Ontario Court of Appeal upheld a lower court’s decision and confirmed its analysis of “comparable employment” when employees mitigate their damages.

The employer, Imperial Oil (“Imperial”), sold one of its divisions to Mac’s Convenience Stores(“Mac’s”). Mac’s offered continued employment to certain employees. However, former Imperial employees, 63 year old Dussault who had 39 years tenure and 57 year old Pugliese, who had 36 years tenure both rejected Mac’s employment offer. In particular, the offers required the employees to sign a release in order to work for Mac’s which unfairly required them to give up potential rights to amounts otherwise owed by Imperial. Additionally, the employees’ prior service with Imperial was not recognized, the offers only guaranteed the same salary for a period of 18 months with no indication of what their salary would be after that period and offered materially less beneficial benefits. The two employees did not see the new offer as comparable to their employment with Imperial and instead claimed wrongful dismissal damages against Imperial.

The Court agreed with the employees and held that Mac’s failed to offer comparable employment to the two employees. Therefore, they were not obligated to accept those offers and were entitled to wrongful dismissal damages. The judge found Dussault and Pugliese’s circumstances to be similar to the exceptional ones in Keenan v. Canac Kitchens Ltd., 2016 ONCA 79. Having regard to the Bardal factors, the Court looked at the two employees’ length of service, age, positions, levels of responsibility and the availability of similar employment in light of both of their experiences. As a result, the two employees were both entitled to an elongated notice period of 26 months.

The runner up, coming in second on our ‘top five’ list is a case dealing with bad faith and overly aggressive litigation tactics. Additionally, Monkhouse Law represented the Plaintiff in this matter.

In this case, Ruston v Keddco MFG (2011) Ltd, 2019 ONCA 125, the Ontario Court of Appeal reiterated the employer’s obligation of good faith and fair dealing in the manner of dismissal. Further, an employers’ conduct both before and after termination may be relevant to the moral damage analysis if that conduct was part of the manner of dismissal.

Ruston was terminated from his employment with Keddco for cause. When Ruston told his employer that he would be hiring a lawyer, Keddco advised him that if he did so, they would bring a very expensive counter-claim against him. In response to Mr. Ruston’s statement of claim seeking damages for wrongful dismissal, Keddco filed a statement of defence and counter-claim alleging cause and claiming damages of $1.7 million for unjust enrichment, breach of fiduciary duty and fraud, as well as $50,000 in punitive damages.

The Court held that not only was the manner of dismissal devastating, Keddco’s conduct in threatening Mr. Ruston not to make a claim caused him considerable stress warranting $100,000 in punitive damages and $25,000 in moral damages against Keddco.

The Court discussed the importance of considering overall damages awards and potential double recovery. In this case, however, the Court did not agree that awarding both aggravated damages and punitive damages amounted to a double recovery. The Court confirmed that aggravated damages aim to compensate a plaintiff for serious damages caused by the breach of the employer’s duty of good faith and fair dealing in the manner of dismissal, while punitive damages seek to punish and denunciate inappropriate or unfair conduct. The Court upheld all of the damages and substantial indemnity costs awarded to Ruston at trial in the sum of $1,151,311.82.

There were many significant cases this year, however there are two that once ultimately decided, will have major impacts on employment law across Canada. Both Heller v Uber Technologies Inc, 2019 ONCA 1 and Matthews v Ocean Nutrition 2019 NSCA 60 have made our #1 spot on the list for 2019.

In this case, Heller v Uber Technologies Inc, 2019 ONCA 1, a class action was started on behalf of Uber drivers in Ontario claiming damages of $400 million. It was alleged that the workers were misclassified as independent contractors rather than employees, therefore denying them their minimum employment entitlements. In 2018, Uber brought a preliminary motion to stay the proposed class action in favour of arbitration in the Netherlands under Netherland laws. The first level court ruled for Uber and granted the stay.

The Ontario Court of Appeal overturned the court’s decision. The Court held that if Uber drivers are presumed employees the mandatory arbitration clauses in their agreements with Uber contracted out of the ESA, deeming them unenforceable. The Court decided that imposing arbitration in the Netherlands was unfair and that the Uber chose the arbitration clause to favour itself.

Uber obtained leave to appeal at the Supreme Court of Canada (“SCC”) and was heard in November 2019. In 2020, the SCC’s decision will have to clarify whether employment standards claims are subject to foreign arbitration provisions included in independent contractor or services agreements.

In this case, Matthews v Ocean Nutrition 2019 NSCA 60, Matthews worked for Ocean Nutrition (“Ocean”) for 14 years as a senior chemist. In 2007, the Company hired a new Chief Operating Officer (“COO”). Under the new COO Matthews’ job duties were progressively reduced over that time, and he was gradually sidelined from significant involvement in projects that were relevant to his job descriptions and expertise.

At the same time, in 2007, Ocean put in place a Long Term Incentive Program (“LTIP”) for the senior management team, including Matthews, that would grant the recipients a specified share of the proceeds if the company were to be sold with Ocean. In June 2011, Matthews left the Company and filed a wrongful dismissal claim. In July 2012, Ocean was sold to a competitor which would have triggered a $1,086,893.36 payout to Matthews under the terms of the LTIP if he was deemed an employee at the time.

At trial, Matthews was found to be constructively dismissed and entitled to a 15 months’ notice period. He was awarded more than one million dollars, most of which were related to the incentive plan. According to the judge, if Ocean had acted in good faith, and had Matthews remained employed throughout the notice period, his right to that share of the company would have materialized.

The Nova Scotia Court of Appeal decided that, where incentive plan language is sufficiently clear, it is inappropriate to award a long-term incentive payment that would have accrued during the termination notice period. One dissenting judge disagreed. In his view, there ought to be consequences for an employer who acts dishonestly in performing the contract.

The Supreme Court of Canada (“SCC”) granted and heard Matthews’ appeal. The SCC is expected to release a key decision that will clarify an employer’s duty of good faith and the interpretation of exclusion clauses in employment contracts.

As you can see, 2019 has truly been an exciting year for employment law. The fact that both of the #1 cases to reach the SCC level highlights employment law shifts across Canada and 2020 will bring some important decisions for both employees and employers.