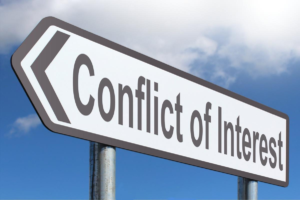 In a recent wrongful dismissal decision of the Superior Court of Justice, Johnston v The Corporation of the Municipality of Arran-Elderslie, 2018 ONSC7616 (CanLII), the Court was not tasked with determining the notice period – as that had been agreed to between the parties – but instead the Court was to determine whether or not there was cause to terminate the employee and if not, did the manner of his dismissal call for the award of extraordinary damages.

The employment contract between the Plaintiff (Johnston) and the Respondent (Municipality of Arran-Elderslie) begin in 2003. After the Plaintiff’s termination for cause he sued his employer for breach of contract and sought punitive and aggravated damages.

The central issue related to the conflict of interest was whether the employee tried to conceal that he was inspecting buildings, in his role with the municipality, that he had previously designed.

The Court found that his employer not only knew he had both designed and inspected the buildings but that evidence had been tampered with and crucial witnesses were not called by the Municipality.

It is important to highlight that even though it was found that the employee was operating in a conflict of interest, the employer was estopped from relying on this to establish cause due to their knowledge of it.

Having found the termination was wrongful, the Court examined whether the employee was entitled to extraordinary damages. The Court concluded that Johnston’s career never recovered, he applied for numerous jobs, his design business suffered, continued media coverage was humiliating and his marriage ended in part due to the events.

The Court ultimately found the manner of his dismissal and the negative impact on his life was a wrong deserving of $200,000 of punitive damages and $100,000 in aggravated damages.

In the costs decision the employee was successful in securing another $160,000 in substantial indemnity costs because he was found to have achieved greater success than his offer to settle the matter (2019 ONSC 1210(CanLII)).

Had the employer opted to terminate the employee not for cause, it would have cost them 6 months of the employee’s salary or just under $71,000. Instead, this approach cost them about $531,000 in amounts to the Plaintiff alone.

Monkhouse Law is an employment and disability law firm, in part, helping employees ensure they receive their full entitlements upon termination. If you have any questions, please contact Monkhouse Law today.