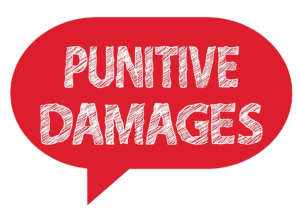 Punitive damages are rarely handed out by the Courts, as they are seen as an exception rather than a rule; however, they can be rewarded when a party has acted exceptionally malicious or outrageous to serve as deterrence. Punitive damages are a deterrent, but they must also be proportionate “to such factors as the harm caused, the degree of the misconduct, the relative vulnerability of the plaintiff and any advantage or profit gained by the defendant” (Whiten v. Pilot Insurance Co. 2002 SCC 18 (CanLII),[2002] 1 SCR 595 at para 94).

The following case review will provide an example into how the courts decide when to award punitive damages:
In the case of Frazier v Brookfield Integrated Global Solutions, 2017 CanLII 55419 (ON SCSM) the plaintiff was terminated after approximately a year of service, but at the time of his hiring the defendant told him that they would take into account his nine years of service at his previous employer. The plaintiff argued that he was wrongfully terminated, but the defendant claimed that the plaintiff had been terminated for just cause on the basis of time theft and for fraudulently signing off on work orders that were incomplete. The employer claimed that it had evidence for these claims, but Deputy Judge Gilbert felt that the employer did not prove these facts. Instead the Judge believed that the employer had just “concocted a story” to justify their termination of the plaintiff.

In his decision, Judge Gilbert said that the employer’s lies were so egregious that its behaviour warranted cause for punitive damages. The Judge went on to say that the employer took on a plan of action to change the plaintiff’s contract without giving him fresh consideration and this behaviour breached its duty of good faith towards the plaintiff, its former employee. The Judge awarded the plaintiff $7,000.00 in punitive damages in accordance with the legal test set out in Whiten v. Pilot Insurance.

This case serves as a strict reminder to employers that they cannot make unfounded and false accusations against their employees in the hopes of terminating them for just cause. If an employer does not have just cause to terminate an employee they must follow the guidelines set in the Employment Standards Act, 2000, by giving them working notice, or pay in lieu of working notice and any applicable severance. If you feel like you have been terminated with just cause when no cause existed, contact Monkhouse Law today for a free 30 minute consultation to learn your options.