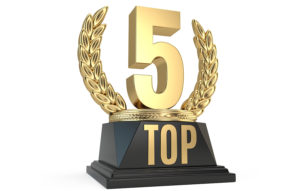 This year, we have seen many impactful decisions on employment law and legislation. Below we have compiled a ‘top five’ list of these decisions, all of which contributed significantly to the scope of employment law in 2017.
And now to the main event:

Right at the end of the year we have a new entry taking the #5 spot.

In this case, the Ontario Superior Court awarded a rather large amount ($750,000) in extraordinary damages (including damages for mental distress, moral damages and punitive damages) for the employer’s pre and post termination conduct in terminating one of its senior employees, including leaving her in limbo for several months.

Specifically, for a period of ten months, rather than making a definitive decision on the future of the Plaintiff’s employment, Wal-Mart effectively created a limbo and a drawn-out termination. After she was formally let go from Wal-Mart, the company continued the Plaintiff’s salary and benefits for 11.5 months (despite a contractual agreement to do so for two years), before it ceased both without notice. Even after the commencement of the wrongful dismissal action, Wal-Mart proved to be difficult and unresponsive, frustrating the litigation process which prevented the Plaintiff from proceeding with her claim in a timely fashion.

Considering the extreme quantum of damages awarded, and the previous case of Boucher v. Wal-Mart Canada Corp., 2014 ONCA 419 (CanLII), it is highly likely that this trial decision will be appealed, and the damages reduced. Notwithstanding, this case still demonstrates the importance of an employer’s obligation to carry out a termination in good faith, and to avoid unnecessary harm to the employee.

For now we have to put it at #5, because of the very high likelihood that the appeal will be a very major fight, given how the ONCA has viewed damages in the past and being so case-specific. At the very least though it is a shocking warning that employers should be concerned about over-litigating wrongful dismissal claims.

Fourth on the list is an employment case that didn’t involve employment at all, but rather termination prior to the start of employment. The case makes the list because this is an under-litigated area, but is very well reasoned and will greatly expand the area of pre-employment litigation.

In this case, an employee was awarded six weeks’ pay in lieu of notice for the termination of an employment contract, even though the employee had yet to complete even a single day of work. It goes against the idea that employees are only entitled to a certain amount of weeks per year of service, in this case it was 6 weeks for 0 days of service.
In Buchanan, the employee and employer agreed to contractual terms of employment on October 19, 2016. The first day of work was set for November 1, 2016. However, on October 29, 2016, the employer retracted the offer of employment.

The Court found this to be a wrongful termination since the Plaintiff was considered an employee from the time the contract of employment was formed, and not from his first day of work. The Court also found that the employer could not successfully rely on the probationary clause (since the contract was terminated outside the three-month period the clause covered). Thus, the Plaintiff was entitled to reasonable notice of termination at common law.

3) Changes to ESA via the Fair Workplaces, Better Jobs Act, 2017

Not a case, per-say, but a major change in the law takes the third spot on our list.

This year, the government proposed changes to the ESA, many of which will take effect as early as January 2018. Of particular note are the increases to minimum wage and vacation pay, the requirement for equal pay for temporary workers and onus shifting regarding proving employment.

Vacation Pay: Currently, the requires that all employees are to receive at least two weeks of vacation pay per year. With the new legislation, employees with five years’ service with the same employer will now be entitled to three weeks of paid vacation.

Equal Pay: All casual, part-time, temporary, seasonal and temporary help agency employees (who are completing substantially the same work) are required to be paid the same rate of pay as full-time/permanent employees or employees of the agency’s client.

Employee Misclassification: To deter the misclassification of employees as independent contractors (which would disentitle the employees to protections under the ESA), should a dispute arise, the onus will be on the employer to prove that the individual in question is not an employee.

Considering these are only a few of the approved changes in Bill 148, and since they are to take effect quite quickly, it would be wise for employers to review and ensure compliance with same.

Second (or ‘running up’) on our list is Brake v. PJ-M2R, but really McDonalds, since the legal name is just a franchise. Although legally separate people know that it is really McDonalds who takes the hit for this.

The case was a constructive dismissal case, on appeal from the trial decision wherein the judge awarded 20 months’ pay in lieu of notice. The lower level decision was a strong condemnation of poor treatment of employees. On appeal the Court dealt with whether income earned during the notice period ought to be deducted from the damages award.

Ultimately, the Court of Appeal found that the Respondent’s earnings during her notice period were not deductible from the damages award because a) income was earned during the employee’s statutory entitlement period; b) income was earned from a ‘secondary’ job she held during the course of her employment with the Appellant; and c) other miscellaneous earnings were so modest as not to warrant a deduction.

Since the general rule of mitigation in employment law is that any income earned by a dismissed employee during the notice period will be deducted from the damages owed on a dollar-for-dollar basis, Brake is an important case because it demonstrates leniency and an exception to this rule.

Effectively this means that employee mitigation is not required, or deducted, during the first part of their notice period, and that there is a strict onus on employers to deduct any money for mitigation. Given that mitigation is always the last defence for a defendant who has acted poorly, this decision might make some defendants double-think that strategy.

This case brings a clear disposition on termination clauses in employment contracts, and whether a failure to fully comply with the ESA will render that clause invalid. In Wood, the Court of Appeal held that the following termination clause was unenforceable for failing to specifically account for the continuation of an employee’s benefits during the notice period, and for excluding statutory severance pay from the employee’s entitlements upon termination:

[The Company] is entitled to terminate your employment at any time without cause by providing you with 2 weeks’ notice of termination or pay in lieu thereof for each completed or partial year of employment with the Company. If the Company terminates your employment without cause, the Company shall not be obliged to make any payments to you other than those provided for in this paragraph…. The payments and notice provided for in this paragraph are inclusive of your entitlements to notice, pay in lieu of notice and severance pay pursuant to the Employment Standards Act, 2000.

Wood creates a very high standard for limiting employee rights in contracts, which is good for employees who have almost no bargaining power and effectively sets a new ‘ground zero’ for interpretation, wiping away a lot of what came before.

And a lot of what came before was bad, such as the Oudin decision which after Wood and also the North v. Metaswitch 2017 ONCA 790 which followed it was effectively is no longer applicable in law. Wood, and it’s quick successors of North and also Covenoho v. Pendylum Ltd 2017 ONCA 284 add a tremendous amount of clarity on the difficulty of enforcing employment agreements.

And those are, from Monkhouse Law, what we saw as being the top 5 cases/changes in employment law in 2017! We wish everyone a wonderful start to 2018 and look forward to many interesting cases in the new year!