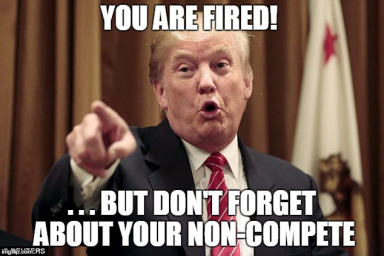 Many employers include a clause in employee contracts that prevents the employee from working for a competing company for a specific period of time following the end of their employment.  These types of clauses are referred to as non-competition clauses.

In the case of Wilson v. Northwest Value Partners Inc., 2015 ONSC 4726 (“Wilson”), the court decides how, despite breaching a non-compete agreement, your employer may still be on the hook for paying you wrongful dismissal damages.

The Plaintiff in the Wilson case was a senior executive at the Defendant company and signed a non-competition agreement upon hiring that prevented him for working for a competing company of the employer for a period of 24 months following his termination.  In December 2013, the Plaintiff was terminated and he subsequently sued the Defendant for wrongful dismissal, claiming that he was entitled to a bonus that was not paid to him.

1.Determine whether the parties actually agreed to settle; and

2.Determine whether the settlement agreement should be enforced.

The Court sided with the Plaintiff and found that the Defendant was required to pay him the funds as agreed upon in the mediation.  The Court based this decision on the following factors:

1.Evidence showed that the parties clearly intended to settle the action;

2.The terms of settlement identified by the Plaintiff’s lawyer in his notes were the same as terms contained in an email from the Defendant’s CFO;

3.Formal Minutes of Settlement documents were prepared and executed by the Plaintiff and the Defendant;

4.The Plaintiff took steps to have the action discontinued against the Defendant.

The Court rejected all of the Defendants arguments for the following reasons:

1.The Plaintiff had no legal requirement to report his new employment to the Defendant;

2.The Plaintiff’s entitlement to the bonus was not tied to his compliance with the non-competition agreement; and

3.The settlement agreement did not contain a provision that prohibited the Defendant from proceeding with an action against the Plaintiff for a breach of the non-competition agreement.

As an employer, it is important to consider a terminated employee’s job-searching efforts, especially when a non-compete clause is involved.  Had the Defendant investigated this more thoroughly, the Defendant could have avoided paying the Plaintiff a large sum of money.

If you have a non-competition clause in your contract that you are concerned about, contact Monkhouse Law today for a free 30-minute consultation.