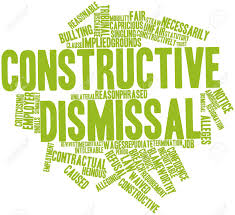 Ciszlowski v Canac Kitchens: Constructive Dismissal: Can you be constructively dismissed when your employer does not change your rate of pay?

Constructive dismissal is when an employer unilaterally changes a fundamental term of an employee’s contract of employment to a substantial degree that the employer has breached the contract and the employee is considered terminated from their position.

Constructive dismissal gives rise to an employee’s right to pay in lieu of reasonable notice, which can be up to two year’s pay, depending on seniority.

It may be intuitive that decreasing an employee’s pay could give rise to a constructive dismissal, as many would agree that rate of pay is a fundamental term of any employment contract. However, when an employer does not change an employee’s pay, but rather changes their duties, the distinction between whether it is a fundamental term of their employment giving rise to a constructive dismissal is not so clear.

The recent case of Ciszlowski v Canac Kitchens, 2015 ONSC 73, dealt with a similar issue. In Ciszlowski, the Plaintiff began working for the Defendant in 1990. During his tenure he received several promotions, and was working in the position of Contract Project Manager reporting directly to the Defendant’s Director of Finance.

On May 25 2004 the Plaintiff left work because of a heart condition for which he had surgery on June 30, 2004, and commenced a short-term disability leave. The Plaintiff returned to work part-time on March 14, 2005 and resumed full-time work April 11, 2005. When the Plaintiff returned to work he was told that instead of the Director of Finance, he would be reporting to the Credit Manager, Aziz Poonawalla. Mr. Poonawalla then instructed the plaintiff to instead to the contracts supervisor. In addition to this change in the reporting, the Plaintiff also lost control over a small office budget, was no longer invited to attend certain managerial meetings, no longer had an employee reporting to him and he no longer received or processed new contracts.

The Plaintiff then commenced a long-term disability leave on January 11, 2006 and made several requests to return to his former position.

Canac terminated the Plaintiffs employment in a letter dated May 29, 2008, after approximately 8 years of service, while on long-term disability leave due to the company shutting down its operations in Canada.

For employees, this case leaves open the door that if some duties are taken away from them leaving the impression that they have been demoted, even though pay and title remain the same, they may have a claim for constructive dismissal, and notice of said dismissal.

For employers, this case is a warning that when an employee returns from leave, employers should take care to give employees the same duties they previously enjoyed, or they may be at risk of a claim for constructive dismissal.

If you believe you have been constructively dismissed you should discuss your rights with an employment lawyer. Call Monkhouse Law today for a free 30 minute phone consultation with a licensed legal professional.