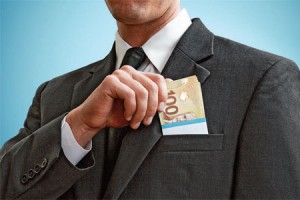 Entitlements Stemming Beyond Termination: Terminated Employees Entitled to Commissions and Bonuses as per Common Law

For employees in positions whose income is made up significantly of, or entirely of, “additional income” such as bonuses or terminations, a dismissal can leave them in a less than desirable financial situation, even more so than a non-dependent terminated employee. Things like commissions are typically associated with active employment only, and as such this leaves a terminated employee who became accustomed to having a bonus or commission make up their income even more financially insecure.

When considering whether an employee will be found entitled to compensation above and beyond severance pay, or reasonable common-law notice, a court will consider whether or not the employee would have earned that amount had they been actively employed throughout the notice period.

Given their nature, as being tied to day to day, or month to month performance, commissions are understandably less of a “given” in terms of a severance award. However, they were recognized as being part of a wrongful dismissal severance award in Holland v. Hostopia.com Inc., 2015 ONCA 762.

In Holland, the Plaintiff had been employed as a National Account Manager for seven years, a position which afforded a compensation heavily peppered with commissions. He was terminated without cause and was provided with his statutory minimum termination and severance pay and a portion of his commissions owing, and sued for wrongful dismissal on the basis that this amount was inadequate; not only because it did not include reasonable common law notice but because it did not compensate him for commissions owing at the time of termination.

The Plaintiff did find employment about three months after his termination, also commissions-based, but the commissions with the new position did not start until a significant time following his hire date.
The matter was initially dismissed by the trial judge, on the basis that the Plaintiff’s employment contract precluded the entitlements claimed, but the matter was appealed. On appeal, the court considered not only the Plaintiff’s entitlement to the commissions owing at the time of termination (which were due to him in accordance with section 11 (5) of the Employment Standards Act, 2000), but also his entitlement to commissions throughout the notice period. The court awarded him commissions throughout the eight (8) month notice period as they were a regular part of his compensation, and awarded same in accordance with his commission plan, provided by the Defendant.

As many employers pay out severance pay on ‘base’ salary only this is a major reason for commission employees to negotiate their severance packages.

The above case demonstrates that commissions are generally owed during the notice period. If you have concerns regarding your commissions upon termination, contact Monkhouse Law today for a free consultation.